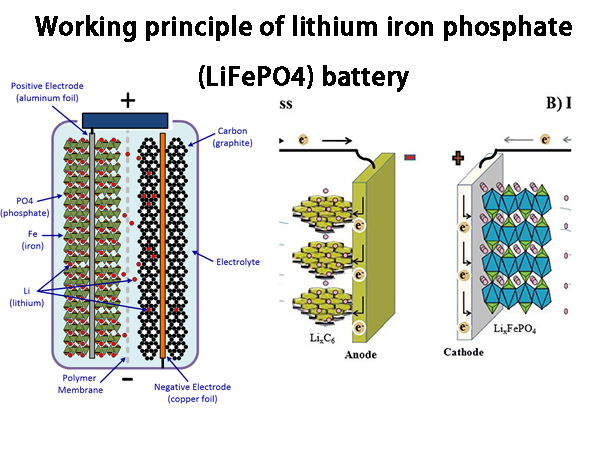 2) Working mechanism of lithium iron phosphate (LiFePO4) battery
Lithium iron phosphate (LiFePO4) batteries are lithium-ion batteries, and their charging and discharging principles are the same as other lithium-ion batteries. When charging, Li migrates out of the FePO6 layer, enters the negative electrode through the electrolyte, and is oxidized to Li+. The electrons pass through the conductive agent and current collector in contact with each other from the external circuit to the negative electrode. The discharge process undergoes a reduction reaction, which is the opposite of the above process.
The charge and discharge reaction of LiFePO4 is as follows:
Charge reaction: LiFePO4-x Li+→xe-xFePO4+(1-x)LiFePO4
Discharge reaction: FePO4+x Li++xe→x LiFePO4+(1-x)FePO4
It can be seen that the charge-discharge reaction is carried out between the two phases of LiFePO4 and FePO4. During the charging process, LiFePO4 gradually extracts lithium ions to form FePO4, and during the discharge process lithium ions are inserted into FePO4 to form LiFePO4. Since the structure of these two phases are similar, the coordination relationship of ferro-oxygen changes little during the mutual change, so although the electrode material has phase changes, it does not affect the volume effect of the electrochemical effect. This is also the material with good cycle performance. The main reason.
The voltage platform formed by the pairing of LiFePO4 and Li/Li+ is about 3.5V, which is a very valuable voltage window. The electrochemical curve of this substance is very flat. In addition, it has a higher theoretical capacity of 170Ah/kg and an energy density of 550Wh/kg, which is much higher than commercial LiCoO2 and comparable to stabilized LiNiO2. It also has very good stability. After hundreds of cycles of the electrode, there is no obvious change in the capacity and energy density under an excellent process.
There are many vacancies in the LiFePO4 structure that can accommodate lithium ions. Because in the hexagonal close-packed arrangement of oxygen atoms, only half of the octahedral vacancies are occupied, and during the charging process, the valence of iron usually increases in two ways: one is formed by replacing 3 Fe2+ with 2 Fe3+ Iron vacancies; secondly, Fe3+ replaces LiFe3+ to form lithium vacancies. These vacancies lay the foundation for accommodating more lithium ions, making the material have a higher capacity and a larger energy density.

(3) Features of lithium iron phosphate (LiFePO4) battery
From the perspective of the material itself, a positive electrode material with olivine morphology is used in the LiFePO4 battery (see Figure 2 for the crystal structure). Due to the substitution of phosphate for the metal oxygen, it has a large bond angle (109°, and the bond angle is shown in Figure 3). The large bond energy (Co—O) bond is twice, the bond energy is shown in Figure 4), the heat content is low (100J/g, which is 1/3 of the metal manganese, and the heat content is shown in Figure 5), and the thermal runaway temperature is high (400°C, yes 2 times of metal manganese) and other advantages. Therefore, there will be no oxygen evolution under abuse conditions, and it has the characteristics of high safety, good high temperature performance, high stability, etc., which overcomes the safety problems of other existing cathode materials.