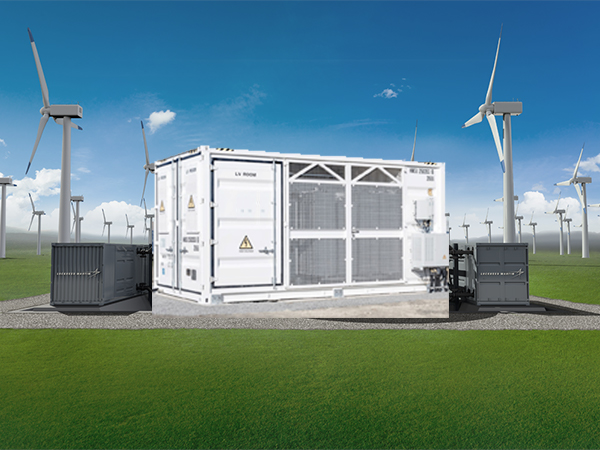 Although wind power is an environmentally friendly and renewable new energy source, its output is greatly affected by natural conditions and has strong intermittent and fluctuation. In addition, the variation rule of wind farm output is not consistent with the variation rule of system load. In order to suppress the fluctuation of the wind farm output and improve the utilization rate of the wind farm, it is possible to configure an energy storage system for the wind farm. The main functions of the energy storage system in wind power generation are as follows:

1. Balance power supply and improve the power supply quality and capability of wind power to power consumers
Wind power is intermittent and unstable, and the production equipment that uses electricity strives to operate continuously, balanced, and under optimal conditions to achieve high production efficiency and high quality. The large-scale energy storage system can play this role. Large-scale power storage is carried out when the wind is strong and the power is long, and the battery is replenished at any time when the wind is small and the power is low.

3. Improve the use value of wind power
After the battery energy storage system is installed in the wind power generation system, part of the excess wind power is stored in the “valley” period, so that less electric energy is sold to the grid at the “average price” taken care of by the national policy, and the stored electric energy is stored in the “bee” period. Selling it to the power grid will definitely be welcomed by the power grid. The on-grid electricity price will no longer be the “average price” taken care of by the national policy, but can be raised to a market price close to the “peak” period. At least it is easier to reach an agreement to improve the wind farm’s own economic benefits.

4. Give full play to the advantages of wind power distributed power supply and expand the role of wind power
China’s vast western region and a large number of islands lack a large power grid, and the number of micro and small wind turbines used exclusively is increasing. With the improvement of living standards and the decline in the price of wind turbines, it is possible to gradually develop small-scale local power grids with large and medium-sized wind turbines as the core to provide electricity for living and production for scattered villages and towns. Distributed wind power stations that are not directly connected to the grid must have power storage devices of a corresponding scale to run with them in order to play the role of wind power and ensure the continuity and stability of power supply day and night. Therefore, the combination with the large-scale sodium-sulfur battery energy storage system is the development and expansion of the direct application of pure wind power; it is suitable for large-scale wind farms as well as medium and small wind farms; and it can improve the quality and economy of distributed power supply , to explore new ways of wind energy utilization with Chinese characteristics and independent intellectual property rights.

To sum up, it can be seen that the configuration of energy storage system for wind power can not only improve the quality and operation efficiency of wind power grid connection, but also reduce the peak regulation pressure of the system to a certain extent.