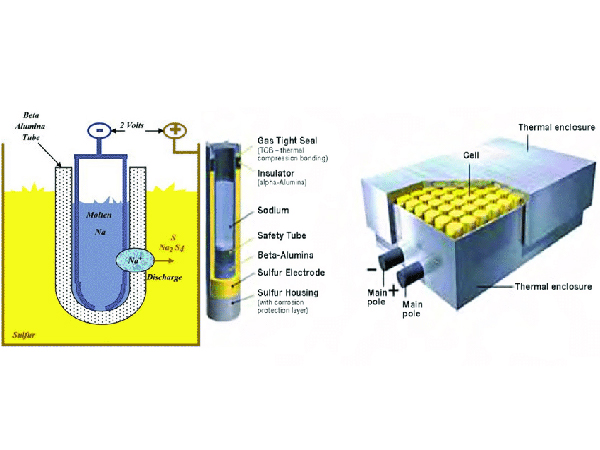 The sodium-sulfur battery is a secondary battery that uses Na-beta-alumina (Al2O3) as the electrolyte and separator, and uses sodium metal and sodium polysulfide as the negative and positive electrodes, respectively. Sodium-sulfur batteries are usually composed of positive electrode, negative electrode, electrolyte, separator and casing. Generally, conventional secondary batteries such as lead-acid batteries, cadmium-nickel batteries, etc. are composed of solid electrodes and liquid electrolytes, while sodium-sulfur batteries are the opposite, which are composed of molten liquid electrodes and solid stainless steel shell electrolytes, which constitute their negative electrodes. The active material is molten sodium metal, and the active material of the positive electrode is sulfur and polysulfur polarized sodium molten salt. Because sulfur is an insulator, sulfur is generally filled in conductive porous carbon or graphite felt. The solid electrolyte and diaphragm is a ceramic material that specifically conducts sodium ions called Al2O3, and the outer shell is generally made of metal materials such as stainless steel. The basic structure diagram is shown in Figure 1, and the charging and discharging principle diagram is shown in Figure 2.

The anode cavity containing molten sodium is separated from the cathode containing molten sulfur with a B-alumina or β”-alumina electrolyte tube. The electrolyte tube can conduct sodium ions and is also an electronic insulator. A-Al2O3 is used between the anode and the cathode The electrical insulator is sealed. The outer shell of the battery is made of stainless steel. The current collector of the cathode is composed of a fiber graphite mat and carbon impregnated by the cathode, and the inside of the cathode cavity is protected by corrosion-resistant materials such as electroplating chromium. The battery has a protection inserted into the electrolyte tube The tube, supported by stainless steel, extends from the sodium storage tank to the bottom of the electrolyte tube. It is combined with a sodium metering device to control the rate of exothermic reaction between sodium and sulfur in the event of a rupture of the electrolyte tube, and limit the temperature when it fails. Offset, the limit value is about 100°C higher than the rated operating temperature. At high temperatures, the vapor pressure of sulfur is very high, so the sodium-sulfur battery must be a sealed structure.

During work, the sodium in the negative electrode loses electrons and becomes Na+ ions during discharge. Because the sodium-containing β”-Al2O3 ceramic is a sodium ion conductor, sodium ions can diffuse through the ceramic tube to the positive electrode and react with the bowl. At this time, connect it. The load will generate current.

The liquid phase changes and chemical reactions of the two poles in the sodium-sulfur battery are as follows:

At the beginning of the discharge, the positive electrode active material is in the two liquid phase regions (the metallic sodium and sodium polysulfide are both in the liquid state), and the following reactions occur at this time:

Since both Na2S5 and Na2S4 are in the molten liquid L, their concentration changes, so aNa2S5 and aNa2S4 also change.

Similarly, both Na2S2 and Na2S4 are in the melt L, Na2S4 gradually decreases and Na2S2 gradually increases, and its electromotive force shows a downward trend.

It can be seen that the sodium in the negative electrode is gradually consumed during discharge, and polysulfide is formed in the positive electrode, and the volume and mass both increase. When the discharge exceeds one point, it enters the two-phase equilibrium zone and generates solid Na2S2, which will block the diaphragm (β”-Al2O3), and the discharge will terminate at this time.