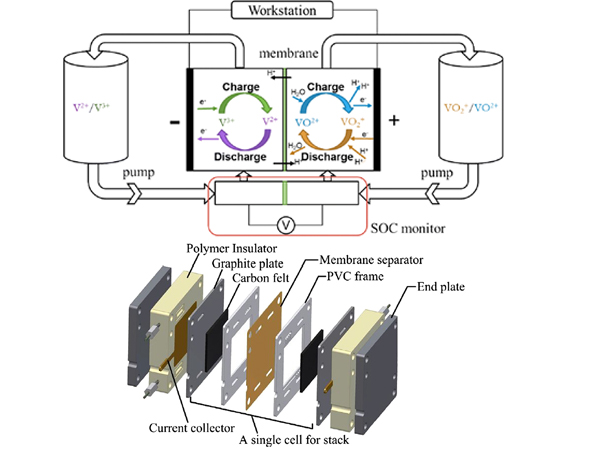 As shown in Figure 1, the flow storage system consists of a stack, an electrolyte solution, and an electrolyte solution storage and supply system, a system control system, and a charge-discharge system. The core of the flow storage system is the electric stack, which consists of dozens or even hundreds of cells for oxidation and reduction reactions. The single cells that realize the charging and discharging process are formed in series or in parallel according to specific requirements, and the structure is similar to that of the fuel cell stack. Different from the active material in the battery that is usually contained in the positive and negative electrodes of the battery, the positive and negative redox active materials in the flow battery are respectively dissolved in the electrolyte solution installed in the two liquid storage tanks, each with a pump. Pass the solution through the flow battery. The electrolyte circulates in the stack, and reduction and oxidation reactions take place on the porous electrodes on both sides of the ion-exchange membrane, respectively. During the reaction, in order to form a closed loop inside the battery and maintain the charge balance of the solution on both sides of the membrane, there must be an ion synchronously migrated from one side of the membrane to the solution on the other side through the ion exchange membrane. Electrochemical systems composed of different active substances have their own specific reaction processes, reaction products and migrating ions.

3) During charging and discharging, the battery only has a liquid phase reaction, and the complex solid phase change of ordinary batteries does not occur, so the electrochemical polarization is small.

4) Long service life: Since the positive and negative active materials of vanadium batteries only exist in the positive and negative electrolytes, respectively, there is no phase change common to other batteries during charging and discharging, and 100% deep discharge can be performed without damaging the battery. Long service life; the electrolyte is sealed and stored in two different storage tanks when the battery is not in use, and there is no problem of self-discharge and electrolyte deterioration that often exist in ordinary batteries. In the 4MW vanadium battery project supporting a 32MW wind farm in Hokkaido, Japan, the vanadium battery energy storage system has been charged and discharged more than 270,000 times, and it is still running normally, far higher than the lead-acid battery’s more than 1,000 times.

5) Fast response speed: The vanadium battery stack is filled with electrolyte and can be started in an instant. It only takes 0.02s to switch between charge and discharge states during operation, and the response speed is 1ms.

7) The self-discharge rate is low and can be stored for a long time.

8) High safety and reliability: Vanadium battery has no potential explosion or fire danger, even if the positive and negative electrolytes are mixed, there is no danger, but the temperature of the electrolyte increases slightly.

9) Low cost: the battery has a simple structure, other materials except the ion membrane are cheap, and the replacement and maintenance costs are low.

10) The electrolyte can be recycled, no harmful gas is generated during the electrode reaction process, and no pollution to the environment. It is a new type of environmentally friendly battery.