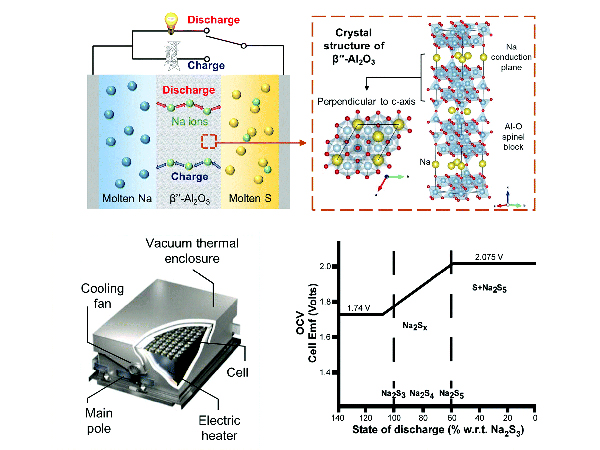 (1) Charging and discharging characteristics of sodium-sulfur battery
The shell of sodium-sulfur battery is usually made of stainless steel, aluminum or special anti-corrosion chrome-plated low-carbon steel and other materials. The negative electrode active material is molten Na with a melting point of 98°C; the positive electrode active material is molten sulfur (S) with a melting point of 119°C. Sulfur has a high electrical resistance, and inert conductive materials must be added to molten sulfur to improve its electrical conductivity. At the same time, a small amount of selenium, boron or tetracyanoethylene C6N4 can be added to the sulfur electrode to improve the utilization rate of sulfur. It is best to add 0.8% mole of C6N4. The electrolyte adopts β-alumina, which is an ion-conducting solid electrolyte, with a chemical formula of Na2O·11Al2O3. At present, β”-alumina with better performance has been put into use. β-alumina is different from ordinary solid electrolytes. Its melting point is 1950~2 000℃. It has considerable ionic conductivity. It is a medium-temperature particle solid electrolyte, which is a feature that other solid electrolytes do not have. The addition of MgO to the electrolyte ceramic can significantly improve the battery performance.

The sulfur electrode melt of the battery (2) is single-phase, and the open circuit voltage decreases with the increase of the sodium-sulfur ratio and the temperature rise, as shown in Figure 1. The operating temperature of sodium-sulfur battery is generally selected between 300~400℃. Under normal circumstances, the internal resistance of the battery mainly comes from the ohmic polarization and sulfur polarization of the electrolyte, but if the molten sodium fails to well wet the surface of the solid electrolyte When, there will be a larger sodium electrode resistance.

Figure 2 lists examples of typical charge and discharge current-voltage curves. In the initial stage of constant current discharge, after the sodium component begins to enter the sulfur electrode, the melt conductance increases and the internal resistance of the battery decreases significantly, and the discharge voltage rises stage, followed by the discharge flat stage. When the discharge continues, the discharge voltage tends to drop, causing a voltage drop. The factors include the influence of sodium-sulfur ratio into the single-phase region and the decrease of open circuit voltage and the effect of sulfur polarization. In addition, the discharge current density and temperature will also change the shape of the curve.

The voltage curve during charging is the inverse process of discharging. During a long period of time during charging, the voltage gradually rises slowly. This rising process is related to the rise of the open circuit voltage of the battery, the increase of the six-level polarization voltage and the decrease of the conductance. At the end of charging, the current-carrying sodium ion concentration in the sulfur electrode area is greatly reduced, and the limiting current becomes smaller. When an insulating sodium-sulfur layer appears on the surface of one electrode, the internal resistance greatly increases, causing the charging voltage to rise sharply, which can be considered as the charging termination point. Has arrived. At this time, part of the sodium ions that cannot be recharged are often retained in the sulfur electrode. Good sulfur electrode design can make the rechargeable rate reach 90%~95%.

(2) Characteristics of sodium-sulfur battery
Sodium-sulfur batteries have many advantages that other batteries cannot match:
1) High specific capacity and specific power: The theoretical specific capacity of sodium-sulfur battery (that is, the effective electric energy per unit mass or unit volume of the battery) is 760Wh/kg, and it has reached more than 300Wh/kg under the actual manufacturing technology level. It is 3 to 4 times that of lead-acid batteries, and its specific power can reach 230W/kg, which is much higher than that of vanadium batteries, but lower than that of lithium-ion and nickel-hydrogen batteries.
2) High-current and high-power discharge: The discharge current density is generally 200~300mA/cm², and it can release 3 times its inherent energy in an instant.
3) High charging and discharging efficiency: Because of the solid electrolyte, there is no self-discharge and side reactions that usually use liquid electrolyte secondary batteries, and the charging and discharging current efficiency reaches 90%.
4) Large capacity and compact structure: Single batteries, connected in series and parallel, become modules of different capacities, and the space and weight are 1/4 to 1/3 of that of lead-acid batteries.
5) Long life: 4500 cycles, the service life is as long as 15 years.
6) Environmentally friendly: fully sealed, no pollution release, no vibration, no noise.

At the same time, sodium-sulfur batteries also have the following shortcomings:
1) Safety issues: Sodium-sulfur batteries can only operate when the temperature reaches about 320°C, that is, when both sodium and sulfur are at a high temperature in a liquid state. And if the ceramic dielectric is damaged and forms a short circuit, the high-temperature liquid sodium and sulfur will directly contact, and a violent exothermic reaction will occur. Although this kind of reaction will not produce gas explosion, it will produce high temperature as high as 2 000 ℃, which is quite dangerous. It is also dangerous when overcharging.
2) Heat preservation and energy consumption: Another problem of running at high temperature is the problem of heat preservation and energy consumption. The sodium-sulfur battery can only be started at 300°C, and a certain amount of heating and insulation is required when the battery is working, so additional heating equipment is required to maintain the temperature.