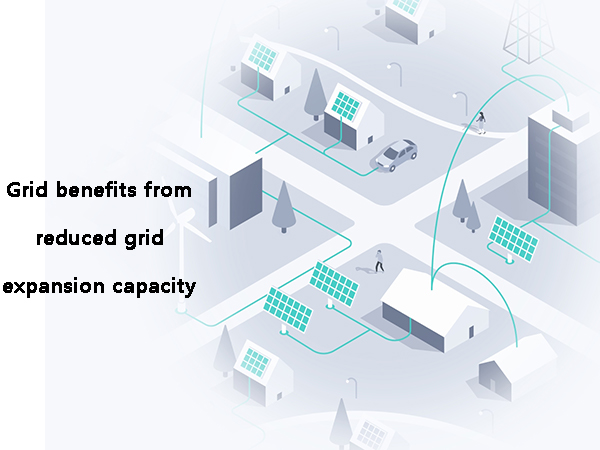 In the competitive power market environment, the power grid company considers how to reduce the cost of power grid operation, maintenance, upgrade and addition as much as possible while providing safe, reliable and high-quality power services, so as to provide users with “high-quality and low-cost” power electrical energy. Energy storage technology is a means to achieve this goal. It can improve power quality, improve power supply reliability, and reduce costs by reducing transmission and distribution network capacity requirements, reducing system congestion, and delaying grid upgrades and additions.

Usually the following situations are suitable to use the method of building battery energy storage devices to reduce the expansion capacity of the power grid:
1) Overload situations are rare and only occur within a few hours of a day;
2) Slow load growth;
3) The upgrade of distribution network is expensive, and small-capacity energy storage can delay relatively large investment, and the “leverage” effect is obvious;
4) The traditional upgrade method does not work, such as wireless road corridors, and lines cannot be laid considering environmental and aesthetic factors.

BESS can be equivalent to a peak-shaving power supply installed on the load side during its life cycle, but the maximum charging and discharging power of the energy storage device and the charging and discharging time under the maximum power affect its peak-shaving effect, because the peak load duration is longer than the valley Therefore, in terms of the operation of the energy storage device, it is necessary to charge the energy storage device with a larger current during the trough period to make full use of the shorter trough period; and during peak regulation, the discharge time needs to be extended to avoid To match the peak period with a longer duration, the discharge current is selected to be lower than the charging current. When the capacity of the energy storage device is too large and exceeds the critical value P. (the capacity required to completely adjust and straighten the load curve), the peak will be cut into a valley, and the valley will be filled into a peak. weaken. So its benefit E in reducing the capacity of grid expansion, (converted to the present value of each year according to its life cycle) can be expressed as

where Pc-critical power required to flatten the load curve, Pc=Pimax-Pa;
Ct&d – the unit cost of the user’s power distribution system (ten thousand yuan/MW);
λt&d – the fixed asset depreciation rate of the user’s power distribution equipment;
Pmax – the long-term maximum charge and discharge power of the battery pack (MW), that is, the rated power, Pmax =kP1;
P1 – average power at valley load;
k—-coefficient;
Pimax – maximum load (MW);
η–the energy storage efficiency of the energy storage device, including the loss of the grid-connected equipment and the charge and discharge loss of the battery;
Pa is the daily average power of a load.

For the convenience of analysis, the above formula can be approximately equivalent to a quadratic function formula, as shown in the formula:
E1=(λt&dCt&dη/Pc)(-P²max+2PcPmax)