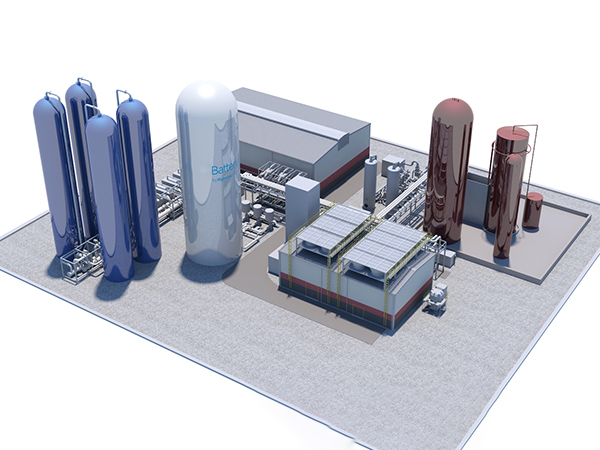 At present, the representative and mature battery technologies mainly include: lead-acid batteries, nickel-cadmium batteries, nickel-hydrogen batteries, lithium batteries, sodium-sulfur batteries, flow batteries (including vanadium batteries, zinc-bromide batteries). Among them, lead-acid batteries have the longest history, mature technology and low cost (in the early stage of the development of electric energy storage technology, they are widely used, and their large-capacity applications are shown in Table 1), but they are limited by energy density and service life and negative environmental pollution The impact is gradually eliminated. Nickel-cadmium batteries are replaced by more environmentally friendly nickel-metal hydride batteries because they cause heavy metal pollution, and are mainly used in the field of power batteries. Due to the large-scale integration technical problems, lithium batteries have not been used for large-capacity applications, but at present this technical problem has achieved a major breakthrough, and large-capacity applications in energy storage have achieved trial operation. As an emerging energy storage technology, sodium-sulfur battery has the characteristics of high energy density, high efficiency, environmental protection, and large capacity. It has received more and more attention and applications and is one of the most potential energy storage technologies. Flow batteries have the advantages of large capacity, high efficiency, and long cycle life, and are widely used in the field of new energy and power systems.

①Lead-acid valve-controlled battery
The electrode is mainly made of lead and its oxide, and the electrolyte is a kind of storage battery with sulfuric acid solution. In the charged state, the main component of the positive electrode is lead dioxide, and the main component of the negative electrode is lead; in the discharged state, the main component of the positive and negative electrodes are lead sulfate. Due to its structural advantages, the lead-acid valve-controlled battery consumes very little electrolyte and basically does not need to be supplemented with distilled water during its service life. It also has the characteristics of vibration resistance, high temperature resistance, small size, and small self-discharge. The service life is generally twice that of ordinary batteries. Its main market is the field of batteries for motor start-ups such as automobiles and electric vehicles. In recent years, it has also been widely used in communications, post and telecommunications, electric power, and railway transportation.

②Lead-acid gel battery
Gel batteries belong to a development category of lead-acid batteries. A gelling agent is added to sulfuric acid to make the sulfuric acid electrolyte into a colloidal state. The difference between the gel battery and the conventional lead-acid battery is from the initial gelation of the electrolyte to the study of the electrochemical characteristics of the electrolyte basic structure, as well as the popularization and application of grids and active materials. Its most important feature is: use a small industrial cost to produce a better quality battery, its discharge curve is straight, the inflection point is high, the specific energy, especially the specific power, is more than 20% larger than that of the conventional lead-acid battery, and the life is generally also It is about twice as long as conventional lead-acid batteries, and its high temperature and low temperature characteristics are much better. In recent years, colloidal batteries have gradually entered the lead-acid battery market and have applications in various fields, but they are mainly recommended for use in the large-scale energy storage market.

③Nickel-cadmium battery
Nickel-cadmium batteries use metal cadmium as the negative electrode active material, and nickel hydroxide as the positive electrode active material of the alkaline storage battery. Nickel-cadmium batteries can be repeatedly charged and discharged more than 500 times, which is economical and durable. Its internal resistance is small, with low internal resistance, it can be charged quickly, and it can provide large current to the load, and its voltage changes very little when discharging. It is a very ideal DC power supply battery. It was originally used as a digital device battery, but because of its “battery memory” problem and cadmium is poisonous, it has been banned by most European countries and is an obsolete product.

④Ni-MH battery
Nickel-built batteries are improved from nickel-cadmium batteries, which replace cadmium (Cd) with a metal that can absorb hydrogen. It provides higher capacity than nickel-cadmium batteries at the same price, less obvious memory effect, and lower environmental pollution (does not contain toxic cadmium). It is known as the most environmentally friendly battery. But when compared with lithium-ion batteries, it has a higher memory effect and a higher self-discharge response. Ni-MH batteries have a larger output current than carbon or alkaline batteries, and are relatively more suitable for high-power consumption products. Some models even have a larger output current than nickel-cadmium batteries. At present, the nickel-oxygen battery is mainly used as a power source, and it is also used to a certain extent in the power source of communication electronic equipment.

⑤Lithium battery
Lithium batteries are a type of batteries that use lithium metal or lithium alloy as the negative electrode material and use a non-aqueous electrolyte solution. The main advantages of lithium-ion batteries are: high specific energy, long service life, high rated voltage, high power endurance, safety and environmental protection and many other advantages. Due to safety and other reasons, lithium batteries are currently only used in large numbers in small devices such as mobile phones and computer power supplies, and very few are used in power supplies. With the recent maturity of lithium iron phosphate technology, a breakthrough has been achieved in the technical bottleneck of lithium batteries for energy storage functions.

⑥Sodium-sulfur battery
The sodium-sulfur battery is composed of molten liquid electrode and solid electrolyte. The active material of the negative electrode is molten sodium metal, and the active material of the positive electrode is sulfur and sodium polysulfide molten salt. Since sulfur is an insulator, sulfur is generally filled in conductive Porous carbon or graphite felt. The solid electrolyte and diaphragm is a ceramic material called Al2O3 that specifically conducts sodium ions, and the outer shell is generally made of metal materials such as stainless steel. The main characteristics of sodium-sulfur batteries are high energy density (3 times that of lead batteries), high charging efficiency (up to 80%), and longer cycle life than lead batteries, but they need to maintain high temperatures during operation.

⑦Flow batteries (including vanadium batteries, zinc-Australia batteries)
The active material of the flow battery can be dissolved and packed in two large storage tanks. The solution flows through the flow battery, and reduction and oxidation reactions occur on the electrodes on both sides of the ion exchange membrane. This chemical reaction is reversible, so it has the ability to charge and discharge. The energy storage capacity of this system is determined by the electrolyte volume in the storage tank, and the output power depends on the reaction area of ​​the battery. Since the two can be designed independently, the flexibility of the system design is large and the limitation of the installation site is small. Flow batteries have multiple systems such as vanadium, vanadium bromide, and sodium polysulfide/bromine. Flow batteries have low electrochemical polarization. Among them, vanadium flow batteries have high energy efficiency, large energy storage capacity, and 100% depth. Discharge, can realize fast charge and discharge, and has the advantages of long life.
The performance parameters of several main battery energy storage technologies are shown in Table 2.