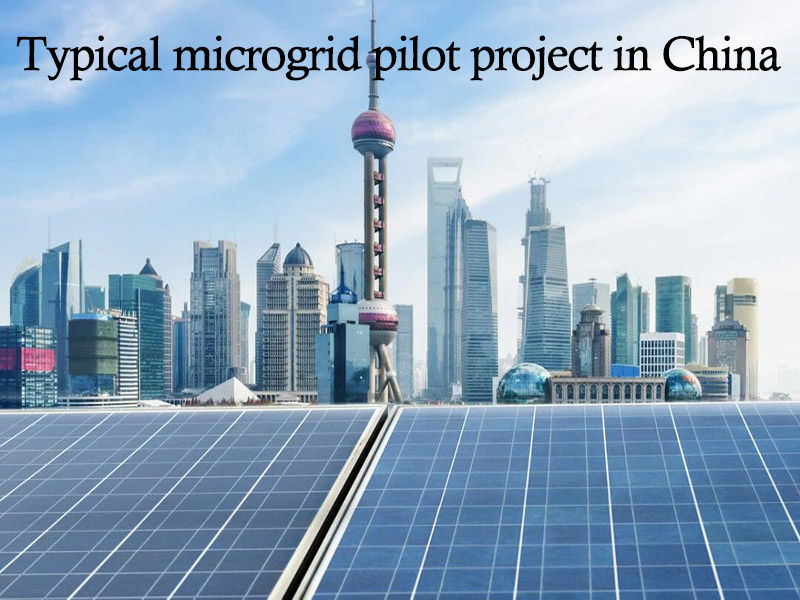 China’s microgrid technology research is still in its infancy, but some microgrid pilot projects have been completed and put into operation.

Henan Zhengzhou Caizhuan Optical Storage Microgrid Pilot Project. This is a microgrid pilot project in the State Grid Corporation’s smart grid pilot project, relying on the roof photovoltaic power generation project of Henan Finance and Taxation College funded by the National Golden Sun Demonstration Project. The microgrid pilot project is equipped with 350kW photovoltaic power generation, 200kW/200kW·h lithium battery energy storage, and is connected to the 380V user side. The project started construction in the first half of 2010 and has been installed and commissioned. The pilot project has completed the on-off-grid switching test and can initially achieve independent operation. The photovoltaic power generation part of the project is funded and constructed by Henan Finance College, the energy storage and other parts are funded and constructed by the State Grid Corporation, and the entire system is operated and managed by the State Grid Corporation.

Microgrid system of combined cooling, heating and power supply in Foshan, Guangdong. This project belongs to the national “863” project. It is based on the building complex of Jihua Road Substation Compound in the Bureau. 570kW, the maximum cooling capacity is 1081kW, the research focus is on the gas turbine-based distributed energy supply system and its key unit technologies, and no energy storage system is configured due to cost considerations. The gas turbine in the system is connected to the 0.4kV voltage level, which can be operated independently or connected to the grid. Since there is only one power source and no energy storage facilities, the project is closer to a distributed energy supply system access project, and many special functions of the microgrid have not been realized. The project is funded and constructed by China Southern Power Grid Corporation and is responsible for operation and management.

Guangdong Zhuhai Dongao Island Wind and Diesel Storage Microgrid Project. One of the projects supported by the national “Solar Roof Plan” policy in 2009. The voltage level of the microgrid is 10kV, including 1.04MWp photovoltaic, 50kW wind power, 1220kW diesel engine, 2 000kW·h lead-acid battery and intelligent control. The multi-level grid can be switched in or out safely and quickly, realizing the integration of micro-energy and load. , access and operation of clean energy, and also has local and remote energy control systems. The project is managed and operated by Singyes Solar Energy Company. Since it can only operate independently, many special functions in the microgrid cannot be realized.

Zhejiang Dongfushan Island Wind-Light Firewood Storage and Seawater Desalination Integrated System Project. The microgrid belongs to the island power generation system. It uses renewable clean energy as the main power supply and diesel power generation as the auxiliary power supply mode to supply power to the island residents’ load and a set of seawater desalination system with a daily processing capacity of 50t. The project is equipped with 100kWp photovoltaic, 210kW wind power, 200kW diesel engine and 2000Ah battery, with a total installed capacity of 510kW and access to 0.4kV voltage level. The system is operated by Guodian Zhejiang Zhoushan Offshore Wind Power Development Co., Ltd. It can only operate independently and cannot realize the technical characteristics of microgrid.

Microgrid project of Xinao Future Eco-city in Langfang, Hebei. ENN Future Eco-City is a multi-energy comprehensive utilization pilot project built by ENN Energy Group (Langfang) to showcase its technology brand. Relying on the smart buildings in the eco-city, the microgrid is the basic test platform for the comprehensive utilization of multi-energy resources in the eco-city, with an installed capacity of 250kW. Equipped with 100kWp photovoltaic, 2kW wind power, 150kW triple supply unit and 100kW×4h lithium-ion phosphate battery, connected to 0.4kV voltage level, it can be operated independently or connected to the grid. The system is invested, constructed, managed and operated by ENN Energy Group.

Beijing Zuoanmen microgrid pilot project. The system is an integral part of the pilot demonstration project of the smart electricity consumption community built by the Beijing Electric Power Company in Zuo’anmen Apartment in accordance with the overall deployment and technical requirements of the State Grid Corporation for building a smart grid. The system is equipped with 50kWp photovoltaic, 30kW triple supply unit and 72kW·h lead-acid battery, connected to 0.4kV voltage level, which can be operated independently or connected to the grid.

Tianjin Sino-Singapore Eco-city Smart Business Hall Microgrid Pilot Project. The first batch of comprehensive pilot key projects of State Grid Smart Grid. The microgrid is based on smart business halls, with an installed capacity of 35kW. Equipped with 30kWp photovoltaic, 5kW wind power and 25kW×2h lithium battery. The voltage level is 380V. The project is funded by the State Grid Corporation of China and is responsible for operation and management. It is still under construction.

Microgrid project of Helhongde immigrant village in Chenbaerhu Banner, Hulunbuir League, Inner Mongolia. State Grid Corporation of China smart grid construction project. Equipped with 30kWp photovoltaic, 20kW wind power and 42kW×1h lithium-ion battery, connected to 0.4kV voltage level, it can be operated independently or connected to the grid. 24 households and milking stations are selected as microgrid loads in Helhongde immigrant village of Chenbalhu Banner to build a grid-connected microgrid pilot project, mainly researching grid-connected microgrids. The project is funded and constructed by State Grid Corporation of China. Responsible for operation management, which is still in the design and construction stage.

Typical microgrid pilot projects in China are shown in the table.