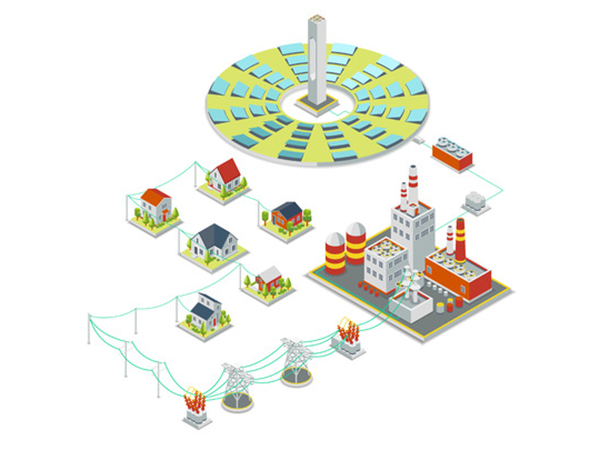 ①Improve the safety and reliability of power supply of the power grid
According to the summary of the current research results of battery energy storage system, the electric energy storage system can be applied to the following fields in the power grid:
1) Voltage control: Support heavy-load feeders, provide power factor correction, reduce the restriction requirements of distributed power generation, reduce the operation of on-load voltage regulation taps, and eliminate flicker, voltage swells and sags.
2) Power flow management: change the power flow, postpone power grid transformation, reduce reverse power flow, and reduce losses.
3) Grid restoration: Provide voltage control and power flow management when the grid is reconstructed after a fault.
4) Electricity market: arbitrage, balance the market, reduce the fluctuation of distributed power, increase the power generation of weakly connected distributed power generation, and replace spinning reserve.
5) Commercial benefits/regulatory function: It helps to improve power safety standards, reduce user outage time, and reduce generator costs.
6) Grid management: Optimize the operation of isolated grids, provide black start, and switch the electric energy storage system (ESS) to an alternative feeder at the normally open node.
In the current electricity market and the current technology cost conditions, if only one of the unilateral benefits is considered, it is very difficult to install energy storage devices in the distribution network to achieve impressive commercialization cases. When it comes to the potential value of energy, it is very important to understand the interaction between multiple aspects and calculate the benefits it brings to all parties.
The Automatic Regional Dynamic Network Management System (AuRA-NMS) project jointly researched and developed by the British Engineering and Natural Sciences Research Council (EPSRC), Scottish Electricity Company, ABB and EDF Energy Company This was done jointly with Durham University to study the application of energy storage systems in the distribution network. The project developed a simulation software to study and analyze the energy storage system’s ability to control voltage and power flow management. The results of the research show that the best strategy for the analysis target power grid is to install a capacity of 0.2MW·h and rated power as active power. The energy storage devices with 0.4MW and 0.4MVar reactive power respectively can solve 2023 of the 2,979 faults defined in the simulation. When the rated power remains unchanged and the capacity is upgraded to 0.4MW·h, the device can be more Solve the remaining 91 types of failures. When the capacity rises to 0.8MW·h, the device can further solve the remaining 56 types of failures. Therefore, installing a battery energy storage device with a certain capacity in the distribution network can well improve the operational safety and power supply reliability of the power grid.

②Improve the utilization rate of power generation, transmission and distribution equipment, and change the growth mode of power construction
Take Shanghai, China as an example. At present, Shanghai’s power generation system and transmission and distribution system are planned and constructed in accordance with the highest annual electricity load. At the same time, Shanghai’s load characteristics show obvious metropolitan characteristics, and the day-night peak-valley difference is increasing day by day. The current daily load rate is about 50% to 60%. Once the energy storage system has formed a scale effect, the energy storage system can be used to increase the utilization of equipment in the power generation and transmission and distribution links: reduce the corresponding power supply and grid construction costs. This will completely change the construction mode of the existing power system and promote its transformation from an external expansion type to an internal efficiency enhancement type.

Although the unit cost of energy storage system is relatively high in the early stage of scientific research, but it has become large-scale, especially after the completion of localization, the cost will be greatly reduced after breaking through foreign technical barriers, and it can save tens of billions of power and grid construction costs in the future.