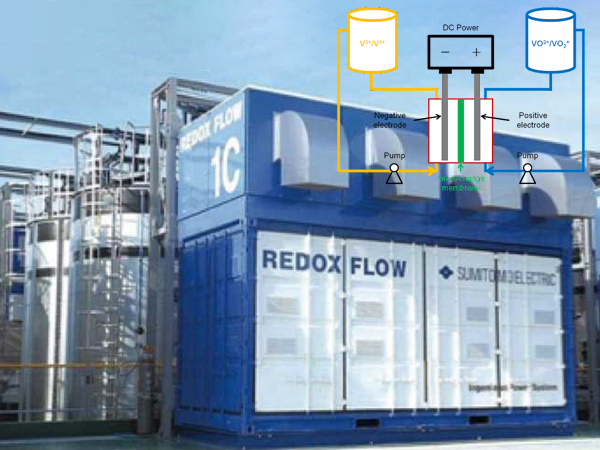 In 1978, Italian A. Pellegri et al. mentioned VRB for the first time in a patent. In 1984, the University of New South Wales (UNSW) in Australia carried out a series of research on VRB, which involved electrode and diaphragm materials, electrolyte preparation methods and so on. UNSW obtained the US patent for VRB in 1955. In 1991, it developed a 1kW VRB stack with an energy efficiency of 81.1%, removing the energy loss of the pump by 3%, the net energy efficiency of the system 78.1%, and the average power density of 0.05W/cm² (charged The discharge current density is 40mA/cm²).

Since 1985, Japan’s Sumitomo Electric (SEI) has cooperated with Kansai Electric Power Co. to develop VRB: successfully developed a 10kw stack from 1985 to 1990; successfully developed a 60kW stack from 1991 to 1994 ; Especially in December 1996, SE1 built a 450kW-class VRB stack. Kansai Electric Power Company has used it as a basic unit of sub-substation for charging and discharging tests. Until September 1999, the experimental data showed that the battery cycle performance is very good. , The average energy efficiency of the battery for 530 cycles is 82.3% (the current density of charging and discharging is 50mA/cm²).

Subsequently, the pace of SEl’s VRB development work was significantly accelerated. Between 2000 and 2002, SEI completed the construction of a number of VRB battery packs with various energy storage capacities, such as 800kW·h for office buildings, 1.5MW·h for semiconductor factories, and 1MW·h for wind farms. h. 240kW·h for photovoltaic cells used in golf courses and 5MW·hVRB energy storage systems for university campuses, etc.

In 1958, the Electrotechnical Laboratory (Tskuba, Ibaraki, Japan) also started the research and development of VRB. Under the guidance of the Electrical Engineering Laboratory, Kashima-Kita, Japan’s largest private power company, began to develop VRB and related technologies in 1990, and signed a license agreement with UNSW for VRB research and development in 1992. Kashima-Kita Company has successively developed the technology of extracting V20 from the ash of power station, and the technology of preparing high-purity vanadium battery electrolyte, the technology of low-resistance and long-life polysulfone type anion exchange membrane, and the technology of high-reactivity and high-conductivity The double-layer electrode made of carbon fiber has been designed and successively developed 2kW and 10kW VRB stacks. Among them, the 10kW stack has undergone 1,000 cycles of tests, and the average energy efficiency is maintained at 80% (charge and discharge current density 50mA/cm²). The company’s 200kW×hVRB stack was also built in September 1997 and connected to the company’s grid system for battery Stability testing of operational performance is currently working on the development of megawatt-level VRB stacks.

Australia’s Pinnacle VRB Ltd and Canada’s VRB Power systems (Pinnacle VRB is now a 66% subsidiary of VRB Power) are also leading the world in the development of large vanadium battery energy storage systems (VRB-ESS). In November 2003, Pinnacle VRB Ltd. built the VRB-ESS for the Australian Hydro Tasmania on King Island company to support wind and diesel power generation. The system has a capacity of 800kW·h and an output power of 200kW. It is currently connected to a hybrid power station. The use of VRB-ESS not only improves the power level of electrical energy supply in residential areas on King island and stabilizes the power supply of the wind power system, but also reduces diesel power generation, thus reducing fuel costs and the amount of exhaust gas emitted to the environment.

In February 2004, the large VRB-ESS built by VRB Power Systems for Pacific Corp (Castle Valley, Utah) was officially completed. The system has an energy storage capacity of 2Mw.h and an output power of 250kW. It is the first large-scale commercial VRB energy storage system in North America. It is mainly used to meet the power demand during peak power consumption in remote areas of southeastern Utah, the United States, that is, peak shaving. The role of grain filling and load balancing.

In addition, Germany, Austria and Portugal are jointly carrying out research on using VRB for energy storage in solar photovoltaic power generation systems; Cellennium Company (Cellenniun Company Limited) in Thailand is also engaged in the development and commercialization of VRB, but on a limited scale.

The Fuel Cell Engineering Center, Dalian Institute of Chemical Physics, Chinese Academy of Sciences, has made rapid progress in the development of VRB with its rich technology accumulation in the field of fuel cells and successful experience in the development of a kilowatt-level sodium polysulfide/bromine redox flow energy storage system (PSB). , The VRB single battery developed has an energy efficiency of 85.3% when charging and discharging at 100mA/cm² at room temperature (output voltage 1.47V), and the power density of the battery is 0.72W/cm² when the output voltage is 1V.