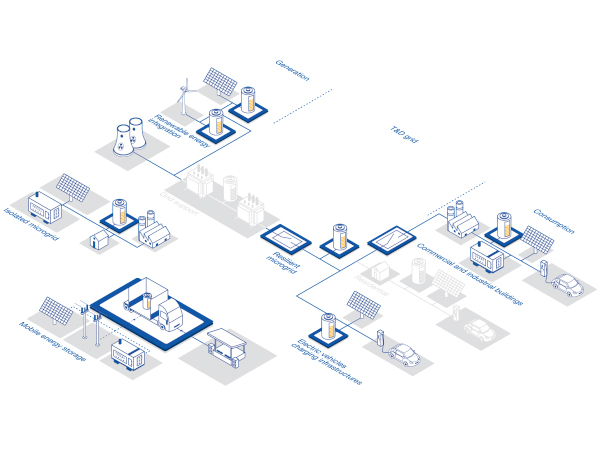 The battery energy storage system can be set with a variety of operating modes according to different applications and user needs. The control system should determine the direction and magnitude of the power transmission of the power conversion subsystem (PCS) according to the preset operating mode, as well as the conditions of the battery and the grid side, and generate active and reactive output commands. The operating modes and control strategies that can be realized by the battery energy storage system are as follows:

① Energy storage peak shaving mode + power quality control mode (PS+PQ)
Another major type of problem in the power distribution system is the PQ problem including voltage sag, surge voltage, voltage harmonics, voltage flicker, power supply interruption, etc., which often cause unavoidable losses to users with sensitive loads. According to the statistics of the American Electric Power Company (AEP), about 90% of the power quality problems last less than 30s. Therefore, when short-term power quality problems occur, the battery energy storage system is used to provide pulse power to the load to deal with the power quality problems. It is feasible. The battery pack has excellent output characteristics, and can output instantaneous power several times the rated power in a relatively short period of time.

The basic idea of ​​achieving both Peak Shaving and Power Quality control modes at the same time is to use the excellent output characteristics of the battery to handle the PQ problems that arise while realizing the peak-shaving regulation of the distribution network, that is, the PS working mode.

When the grid voltage is normal, it is the same as the single PS working mode. The PCS controls the battery system to work according to the local or remote setting process, including three states: battery charging, battery discharging (PS), and standby stage. The electronic switch realized by turning on the thyristor is always closed.

Regardless of the working status of the system, the PCS detection system detects the grid-side voltage in real time. Once any voltage fluctuation exceeds the allowable range or power quality problems such as voltage interruption occur, the PCS controls the electronic switch (SS) to turn off, which will be sensitive. The load is isolated from the distribution network that has power quality problems, and the PCS controls the battery energy storage system to maintain the energy required to output the load. The process including voltage fault detection and PCS raising the output power to the level required by the load should be completed within a few milliseconds. When the grid voltage is detected and returned to the normal level within the allowable time, the PCS controls the battery energy storage system output voltage to synchronize with the grid voltage so that the amplitude and phase relationship of the two are the same as before entering the PQ mode, and the battery energy storage system returns to PS Operating mode.

② Energy storage peak shaving mode + emergency power standby mode (PS+EPS)
This mode is actually a kind of PS+PQ mode. This mode requires the system to adopt appropriate control strategies while achieving peak shaving and valley filling, so as to maintain sufficient capacity in the system at all times as an emergency backup in the event of a power failure. When power is restored, the required switching time can be relatively longer, generally in seconds.

③ Energy storage peak shaving mode + uninterruptible power supply mode (PS+ UPS)
This mode is also a kind of PS+PQ mode, because uninterrupted power supply is also an aspect of improving power quality, but there are some differences in control methods. It is similar to PS+ EPS, but its response speed is faster, and the UPS switching time is required to be short enough (usually in milliseconds) to ensure the continuity of power supply for electrical equipment, including large machinery and electronic equipment. This is generally used in large user occasions that require high power supply reliability.

④Combined with new energy power generation application mode
The research and development of new clean and renewable energy sources such as wind power and solar power have very important commercial and social value. Among them, the research content of photovoltaic power generation using solar energy mainly includes converter design and Maximum Power Point Tracking (MPPT). Because the changes of wind and solar energy are random, when such power generation devices with larger capacity are directly connected to the grid and run At the time, it will bring stability interference to the existing power grid and other problems. Using the battery energy storage device and the new energy power generation device to operate in conjunction, and stably intervene in it, which can convert the randomly variable output energy into stable output energy to solve the above problems .